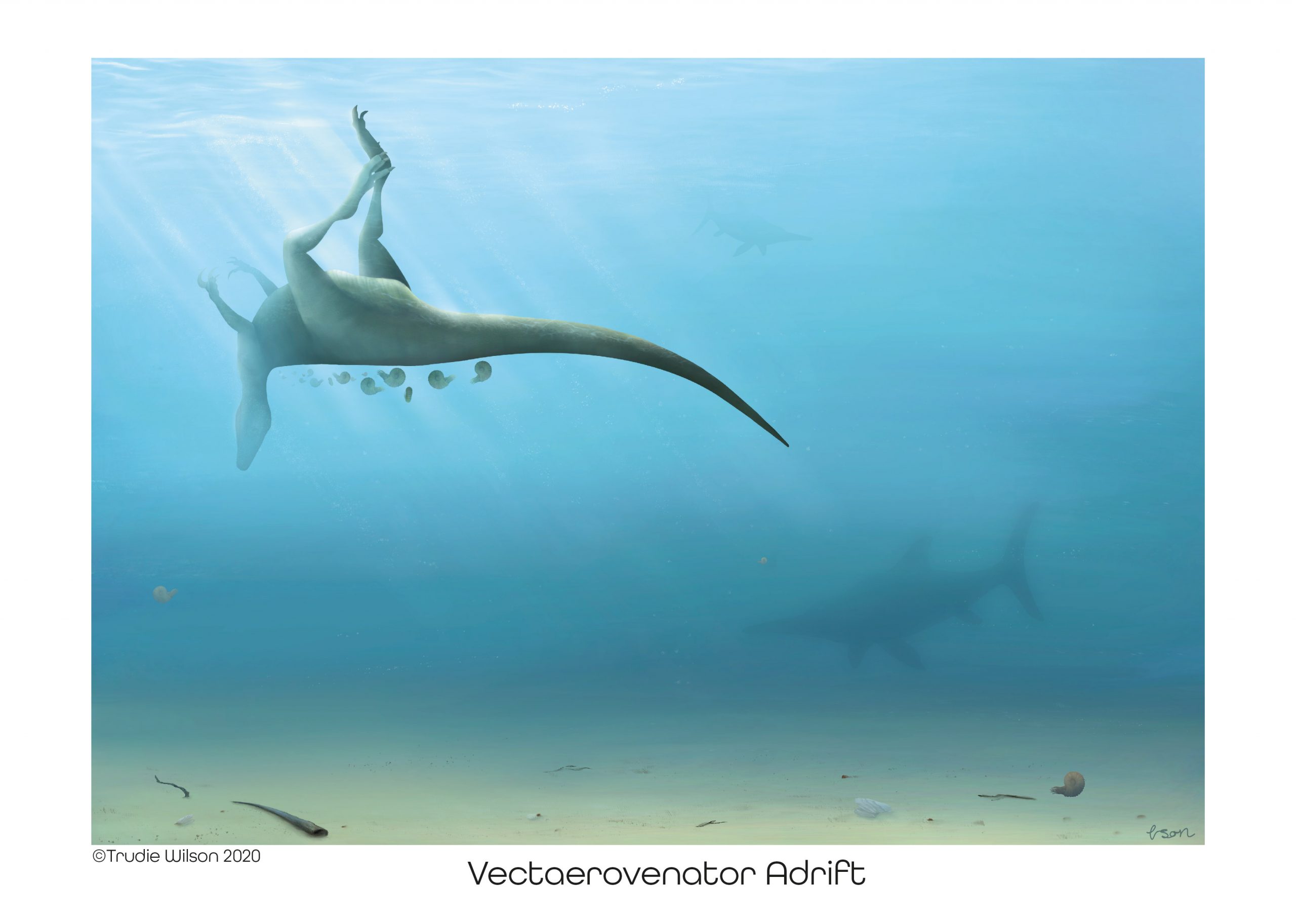 Many of you will have seen this artwork pop up on your various news feeds in the past couple of days, a very exiting time for this island girl I can tell you. So today I thought I would share a little bit about its creation and show you some “behind the scenes” bits. This artwork was a new challenge for me as it was the first time I had done a full reconstruction, I had done a couple of quicker smaller studies before hand but never something from so little. 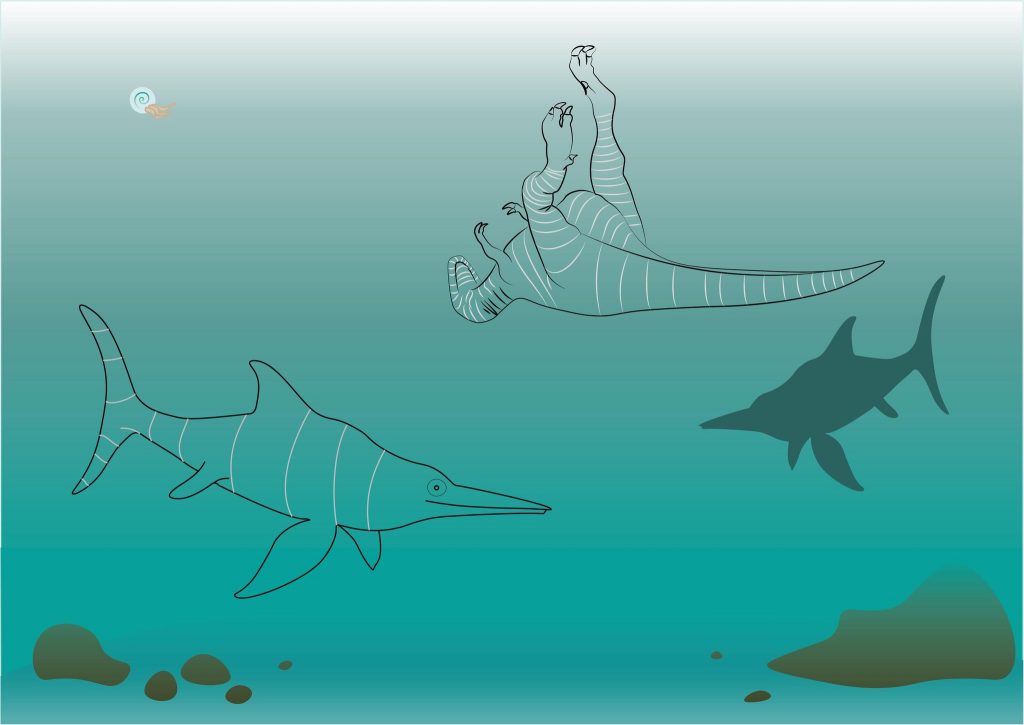 So I started off with an initial concept, I wanted to create a really eerie underwater scene depicting the dino floating just below the surface. I use illustrator to create vector line works which work well as they can easily be manipulated during the scientific input.

I also used some basic gradients to show an initial idea of the scene and seafloor debris. I wanted to include a couple of other potential specimens into the work to give it a real scenic quality.

Speaking to Alex Peaker at Dinosaur Isle I was given possible specimens that could have been amongst our dinosaur.

Working closely with Chris Barker a PHD student at southampton university and author of the paper, we started to construct its form. Considering the information we had from the current collection of vertebrae we were able to make some reasonable suggestions to the anatomy of the specimen.

This is where using illustrator becomes useful as we can quickly adjust lines and structure of the Illustration. Illustrator uses vectors as apposed to pixels meaning that creating it uses predominantly pen arcs rather than freehand drawing. 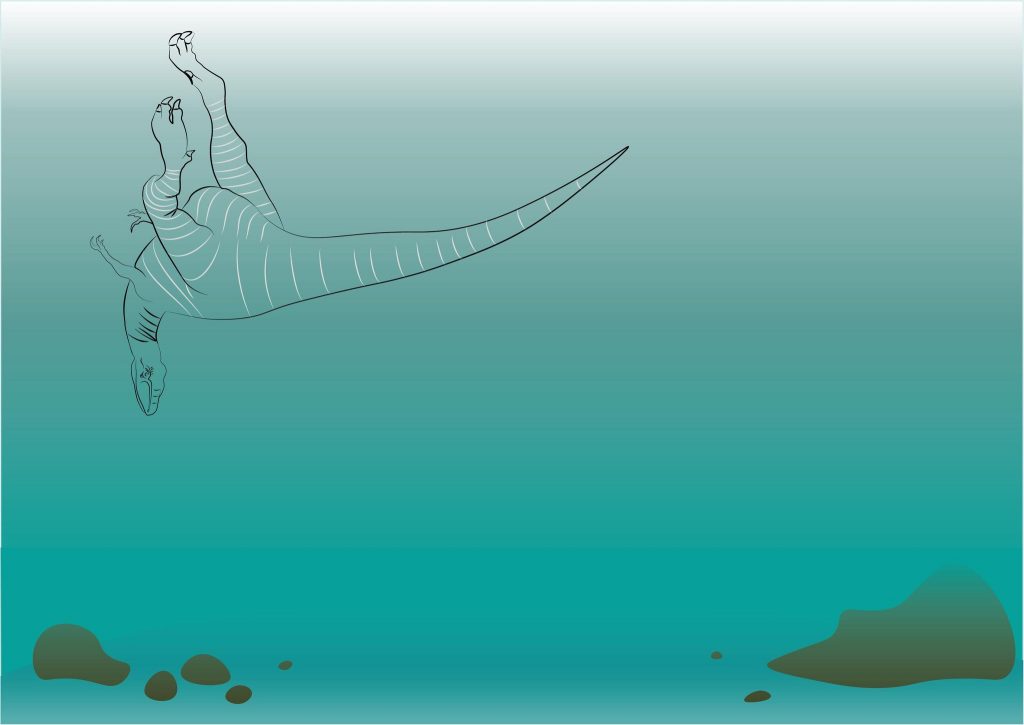 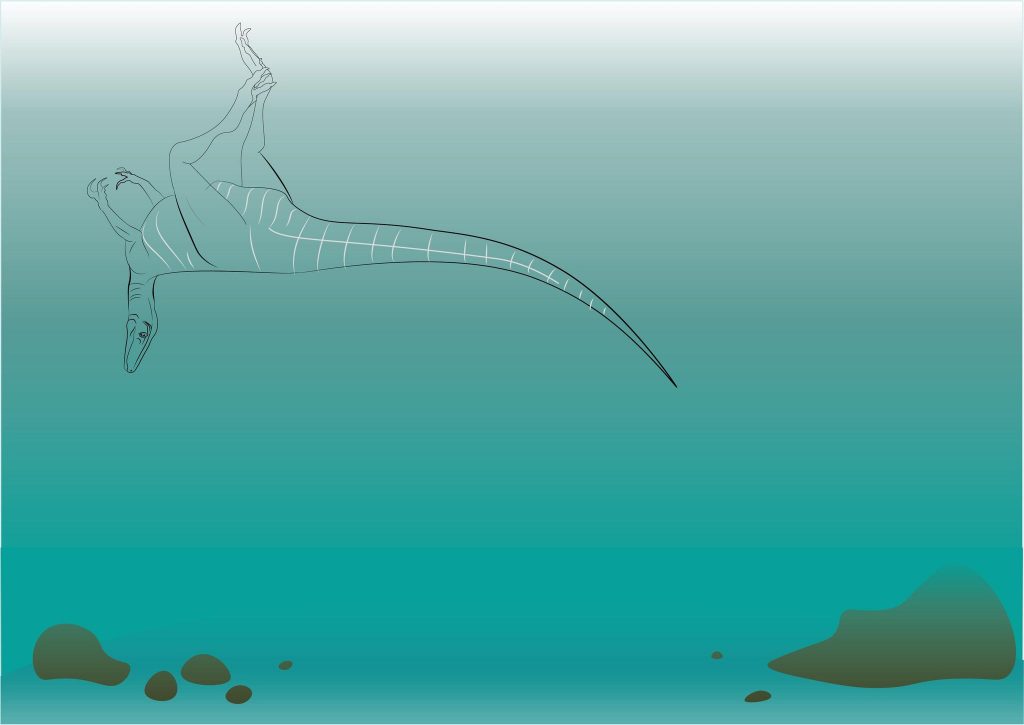 The development of the form continues, here I elongated the tail and considered the weight of limbs in the water, note how the tail falls down towards the seafloor.

working with a gradient really helps me understand the depth and composition of the illustration even during the initial sketches.

if you refer back to my initial concept sketch you can see how much the specimen developed became elongate and I began to fully resolve muscle structure and tone.

During the same time as the dinosaur was being reconstructed I began working on initial painting studies for the background. This was an interim sketch using procreate on my old iPad, I discovered that some brushes lent themselves very well to creating  flecks and debris reflecting light in the water.

I Also spoke to Dr Martin Munt Curator of Dinosaur Isle to discuss the water clarity of the time period and learnt that my more blue palette was more suitable for the sea of that time. 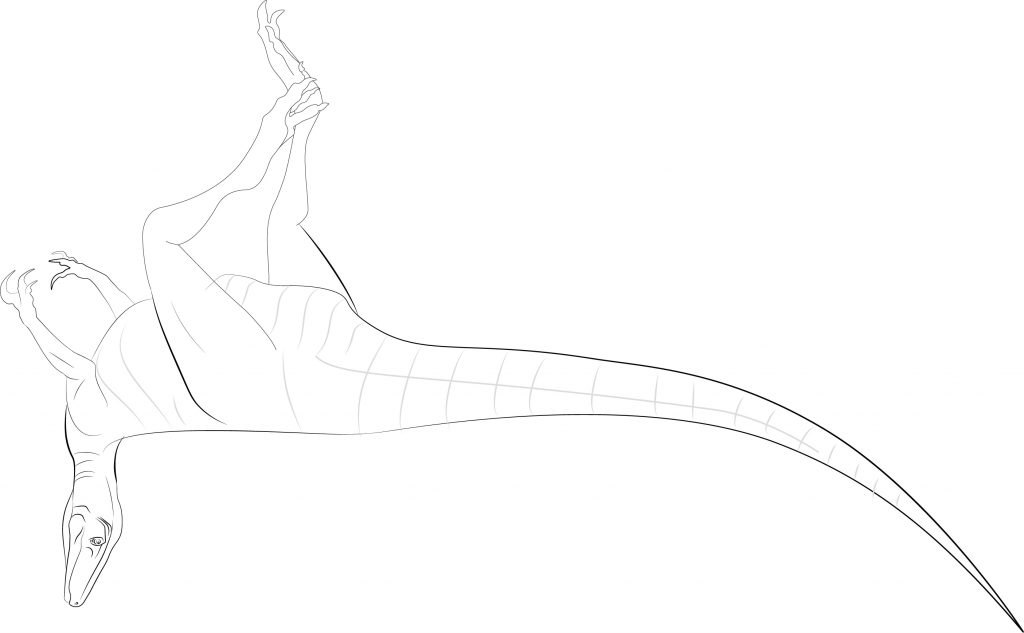 By this stage I had a full sketch that I would then be able to import and work with when creating the final painting. Watch the full process of the final painting stage below. several different specimens were created in other documents such as the ammonites and oysters then the layers are imported into the main file.

The mid stage painting process, here I have added in the ichthyosaurs as mentioned earlier the illustration is based on a particular species. Here I’ve used Pervushovisaurus as I was informed by Alex it has been found in a nearby deposit.

The majority of the shading is complete at this stage, I would however, go back in and deepen some of the darker tones later on. 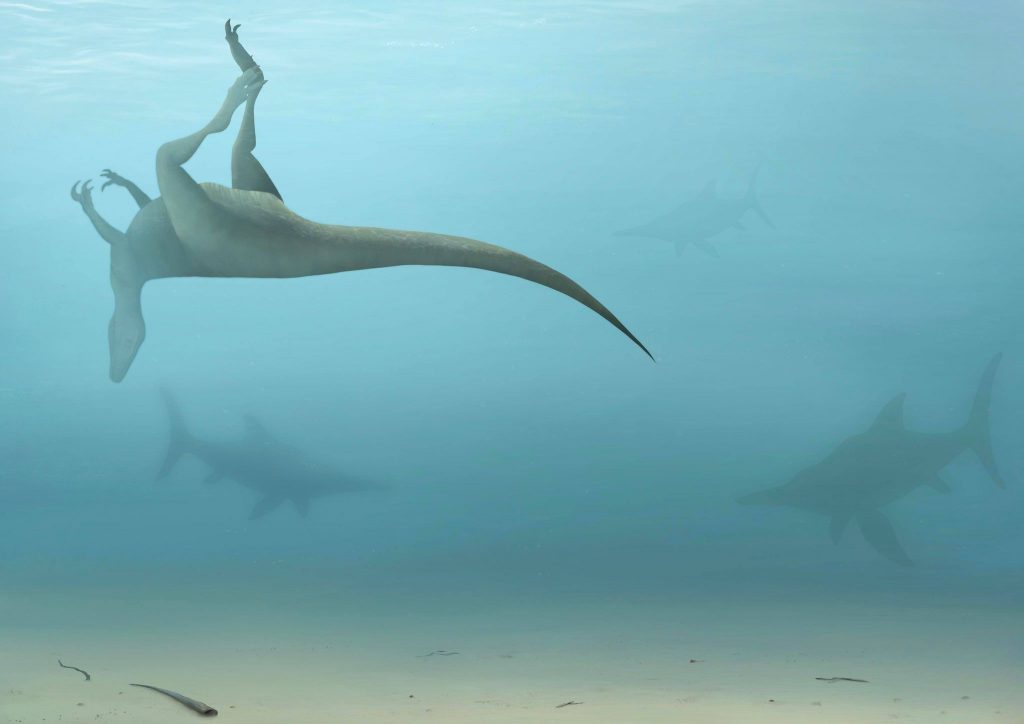 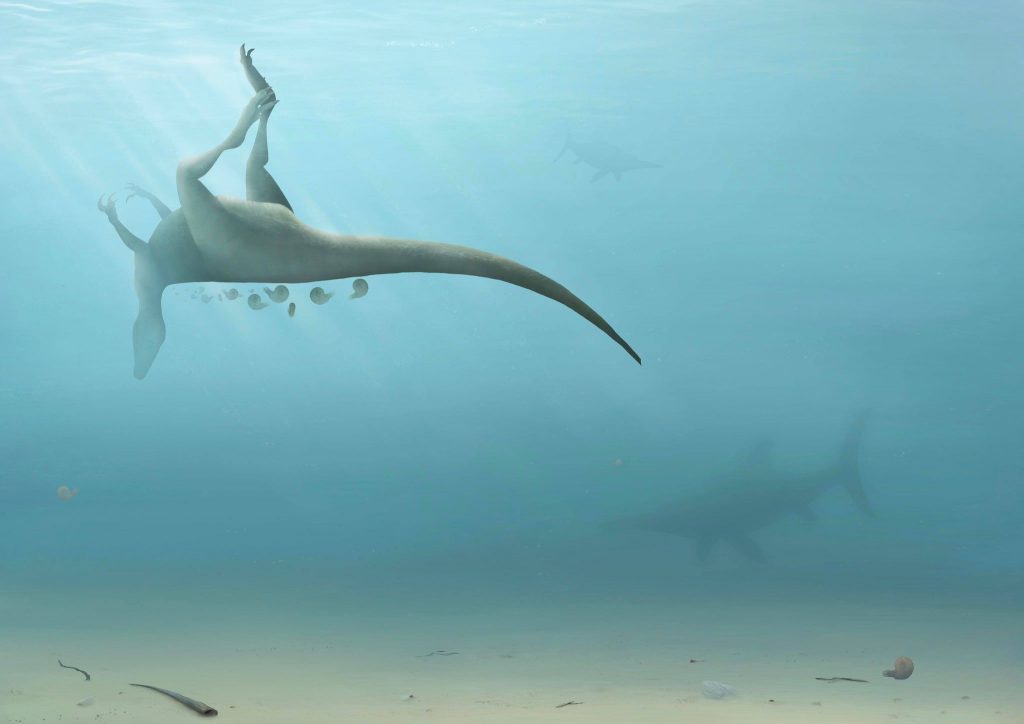 Adding the ammonites in took a little while, we had quite a few versions (which I won’t bore you with), but we settled with them hiding under the carcass. I also added in some light from above the sea, this does give it a slight “ascension of dinosaur ” feel to it but I think it works quite well to highlight the protagonist.

Final colour corrections and the addition of my signature. Like all of my images I ran the image through photoshop to get a nice balance of colour and depth in the work.

The fossil is now on display at Dinosaur Isle Museum Isle of Wight. 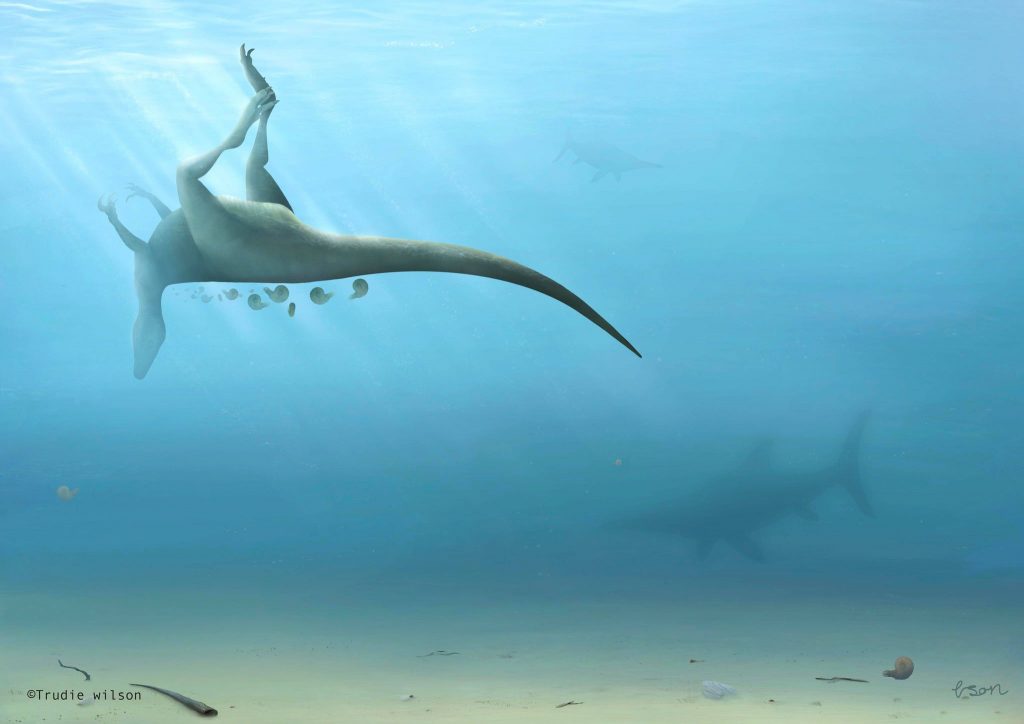 Watch the creation of the painting below.

A thank you to

A special thanks to my partner Alex Peaker (also Dinosaur Isle) for your knowledge, help and support.